Silicon waste can be recycled into battery anode materials by means of an efficient, sustainable method utilizing laser irradiation. 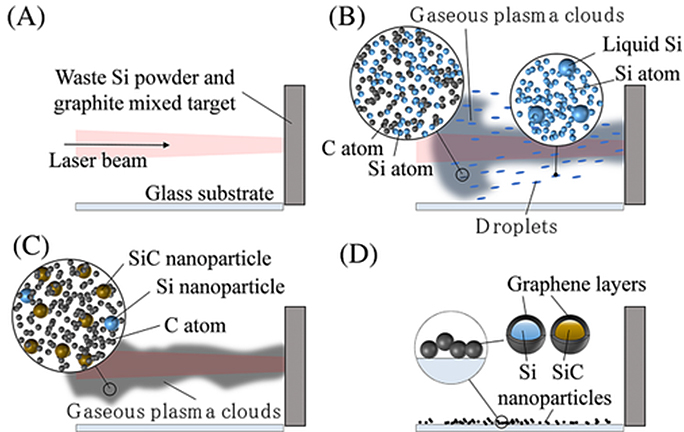 Fig. 12 from the paper1
Schematic of silicon-carbon nanoparticle production for use as lithium-ion battery anode material.

In the context of global efforts to decarbonize society, batteries constitute a key technology. Specifically, scientists are working on increasing the capacity and lifetime of lithium-ion batteries. One approach for achieving this is to switch the anode material from carbon to silicon. The latter would, in principle, result in a larger battery capacity. Silicon anodes are problematic, however, because of their tendency to expand while charging, ultimately resulting in a short lifespan of the battery. As a compromise, silicon-carbon (Si-C) composites are now being investigated as anode materials. Specifically, structures known as "Si-C core-shell nanoparticles" have shown promise. This has boosted the demand for efficient production methods for such particles.

In this research, Jiwang Yan from Keio University and colleagues have developed a single-equipment, single-step process for producing Si-C nanostructures in a short time and at a low cost. The method involves laser irradiation and may lead to the sustainable manufacturing of a whole class of Si-C functional nanomaterials.

Laser irradiation methods require a specially prepared target. Yan and colleagues started by mixing micrometer-sized Si and C powder. The silicon powder was made from sludge, a waste generated during the grinding of silicon wafers, while for the carbon content, commercially-available graphite powder was used. The Si-C powder mixture was then compressed into tablets. Tablet targets were irradiated with laser light, which causes them to vaporize. The vapor, in the form of a plume, expands and diffuses, after which droplets form, which then solidify into nanoparticles.

The researchers performed a characterization of the nanoparticles by means of electron microscopy imaging and spectroscopic methods. Their analysis showed that two types of core-shell nanoparticles form. In the first type, the core consists of silicon only, whereas in the other type, the core material is silicon carbide (SiC). In both cases, the surrounding shell consisted of carbon only.

The scientists also used a high-speed camera to record the formation and the evolution of the plumes generated by the laser irradiation. This helped them to understand how precisely the core-shell nanoparticles form. In the early stages of the process, Si and SiC nanoparticles are generated (the cores). These then pass a carbon "cloud" persisting in the plume, through which the cores get a carbon coating (the shells).

The work of Yan and colleagues signifies an important step forward in the sustainable production of novel anode materials. Quoting the scientists: "The results of this study provide an eco-friendly and cost-effective solution for manufacturing high-performance anodes for future lithium-ion batteries from industrial waste."

Jiwang Yan is now collaborating with industrial partners to translate these results from the lab to the real-life manufacture of lithium batteries and other applications including displays and bio-imaging. 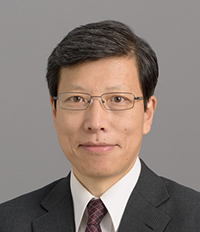 Faculty of Science and Technology, Department of Mechanical Engineering

Jiwang Yan received his Ph.D. in Precision Engineering and Mechatronics from Tohoku University in 2000.
He is currently a Professor at the Department of Mechanical Engineering, Keio University. His research interests are in ultra-precision machining, micro/nano manufacturing, laser processing of materials, and nanomechanics.