Functional analysis of snake venom-like proteins made by the brain

A Keio University study replicates the chemistry of nicotine receptors and identifies a novel snake venom-like protein that blocks these receptors as potential therapeutic targets for neurodegenerative diseases. 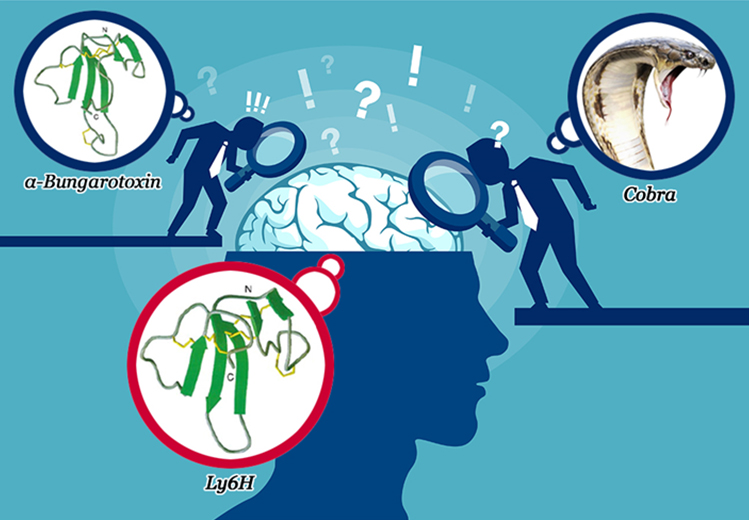 Ly6H, a protein with the same three-finger structure and similar function as the snake venom α-bungarotoxin, is present in the brain. ©︎ Feodora ― stock.adobe.com/jp

In the brain, nicotine targets molecules found on the surface of certain neurons called nicotinic acetylcholine receptors (nAChRs). These receptors interact with nicotine/acetylcholine to modulate brain signals which results in turn are involved in memory and learning. A subset of these receptors known as α7 nAChRs, are under investigation as targets for treating neurodegenerative conditions such as dementia, memory loss, and Alzheimer's disease. However, for deeper insights into this area of research, scientists working in this field must be able to successfully introduce α7 nAChRs into cellular systems and subsequently have them transported onto cell surfaces―a process that occurs in the brain.

In a recent collaboration, Yasuhiro Moriwaki at Keio University and colleagues established a model that successfully mimics the behavior of α7 nAChRs. Intriguingly, using this set-up, the researchers happened to discover the function of a brain protein in blocking these receptors.

Once synthesized, α7 nAChRs must be properly oriented in order for them to find their way to cell surfaces. While this happens naturally within the brain, achieving this in cellular models is challenging. Two molecules, Ric-3 and NACHO, have shown potential in stabilizing the orientation of α7 nAChR. With this in mind, Moriwaki and his colleagues genetically modified common laboratory HEK293 cells to synthesize α7 nAChRs, Ric-3, and NACHO simultaneously. The presence of Ric-3 and NACHO did indeed result in increased levels of α7 nAChRs, especially on cell surfaces. When choline, an endogenous activator of α7 nAChRs, was introduced, the activity of α7 nAChRs was stimulated. This suggested that the α7 nAChRs were functioning properly.

Next, the team used this procedure to explore potential inhibitors of α7 nAChRs. They selected a protein, Ly6H, that belongs to a family of toxins known to suppress α7 nAChRs, such as the snake venom α-bungarotoxin. Using a test called a pull-down assay that identifies proteins that bind together, they found that Ly6H interacts closely with α7 nAChRs. Researchers observed that upon binding to α7 nAChR molecules, Ly6H dampened their activity. The researchers concluded their experiments by checking whether Ly6H affected the internal transport mechanism of α7 nAChRs. However, the levels of internal α7 nAChRs remained unchanged after Ly6H treatment, indicating that they were transferred onto the surface as would normally be expected.

This study established a simple system for imitating the physiology of α7 nAChRs in the laboratory. Notably, these findings will enable research on therapeutic candidates acting on α7 nAChRs without the complication of animal models. In this early study, Ly6H was identified for its inhibitory effects on α7 nAChRs. Looking beyond their research, the team concluded that it will be a subject of future study whether Ly6H could also act as a signaling modifier in α7 nAChR-expressing neuronal or non-neuronal cells in physiological and pathological conditions."

The findings obtained from this study will form the basis for regulating the action of Ly6H via gene therapy involving compounds that control the binding of Ly6H to α7 nAChR and nucleic acid drugs such as antisense oligonucleotides and short interfering RNAs.

In contemplating the outcomes of this work, Moriwaki speculates "It is expected that this research will lead to the development of new treatment methods by advancing the elucidation of the pathophysiology of various brain diseases and inflammatory/immune diseases."

Yasuhiro Moriwaki received a M.S., and Ph.D. in Biological Sciences from the Nara Institute of Science and Technology in 2000 and 2003 respectively.
His current research focuses on the analysis of physiological functions of snake venom proteins and the development of next-generation antibody drugs & antibody drug discovery technologies.