How the COVID-19 pandemic affected the world trade network

A statistical analysis of global trade data from January 2000 till March 2021 shows economic resilience of Southeast Asian countries to the COVID-19 pandemic. 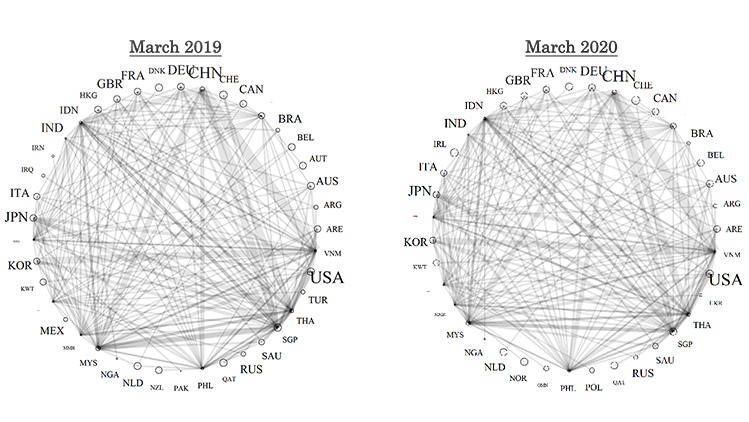 The COVID-19 pandemic has negatively affected global trade, with global output growth falling by 3.2% in 2020. The world's economy is slowly recovering, but a question that will remain is whether the pandemic has had any impact on trade between specific countries. Put more generally, has the relative importance of countries in the global trade network changed? Kozo Kiyota from the Keio Economic Observatory at Keio University has looked into this question, focusing on countries in the Association of Southeast Asian Nations (ASEAN). Kiyota conducted a detailed statistical analysis based on data spanning more than 20 years, and found that the relative importance of ASEAN and other major trading countries did not significantly change after the beginning of the pandemic, suggesting that trade patterns for these countries show resilience.

Kiyota used concepts from network analysis, representing the global trade network as a web-like graph comprised of a set of linked nodes, with each node representing a country, and links between nodes representing trade relationships. The importance of a country (node) is described by a quantity called centrality. Specifically, Kiyota choose to work with PageRank centrality, a measure originally developed to evaluate the ranking of webpages and used by the Google search engine. PageRank centrality takes into account the number of edges of a node, and the number of edges of nodes directly connected to it.

Kiyota used monthly bilateral trade data for 204 countries from the International Monetary Fund from January 2000 till March 2021. The evolution of the PageRank centralities for different countries was checked for structural breaks ―indicative of significant changes in a country's trade pattern. Interestingly, for all ASEAN countries, structural breaks were found to have happened before March 2020 (considered the onset of the COVID-19 pandemic for many countries), implying that the trade shock following the pandemic is temporary. The identified breakpoints are most likely related to the global financial crisis of 2008 and trade liberalization events happening between 2008 and 2015 in Southeast Asia.

The results of this study indicate that the trade patterns for almost all ASEAN countries are resilient. As to why no breakpoints were found that coincide with the COVID-19 pandemic, Kiyota sees several reasons. One is that many Asian countries continued factory operations while imposing adequate infection control measures. Another is that worldwide lockdowns and travel restrictions made consumers spend more on traded goods than on (non-traded) services.

Kiyota concludes that the pattern of trade being resilient to the pandemic for almost all of the ASEAN countries "seems to be a positive message, although caution is required because our analysis focuses on a short period [March 2020 ― March 2021] after the pandemic, owing to the limited availability of data." 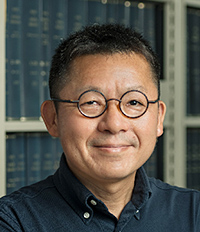 Kozo Kiyota is a Professor of Economics at the Keio Economic Observatory. His research expertise covers empirical international economics. He earned his Ph.D. in Economics from Keio University in 2002. He is the recipient of several prizes, including the Ishikawa Prize from the Japanese Economic Association and the Nikkei Award for the Best Economics Books from the Nikkei Inc.