The development of a stretchable diode that can operate at high frequencies is an important step forward towards wearable electronic sensors for advanced personal healthcare. 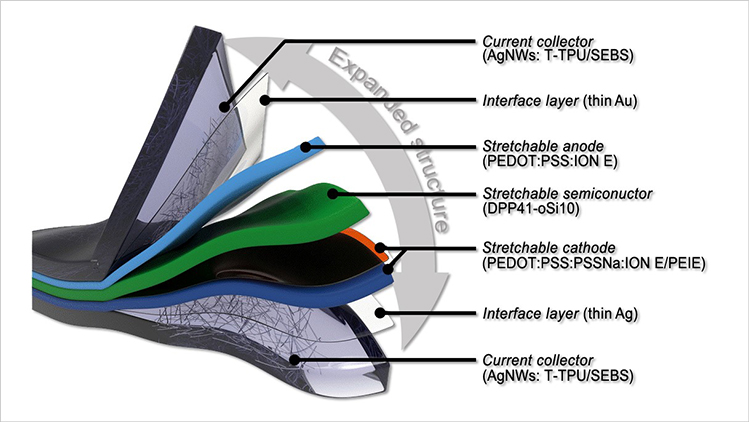 Wearable electronics ― devices worn by people in the manner of a watch, or simply stuck on the skin in an unobtrusive way ― will play an essential role in future personal healthcare. The function of such devices is to record, analyze and transmit biological bodily signals, which can be used for monitoring a person's health and for issuing warnings. Such wearables need to be bendable and stretchable. Extensive research on flexible electronic materials has already resulted in prototypes of wearable electronic sensors and circuits. But in order to transmit signals wirelessly and to communicate with, say, the wearer's smartphone, wearable electronics need to operate at frequencies in the megahertz-to-gigahertz range. This has been an obstacle to progress ― the highest reported operating frequency is only 100 hertz.

Now, Naoji Matsuhisa from the Faculty of Science and Technology, Keio University, and colleagues have developed a stretchable electronic component for use in wearable electronics with operating frequencies as high as 13.56 megahertz (MHz). Using this new stretchable component, the research team successfully fabricated a wireless wearable sensor ― a demonstration signifying an important step forward in wearable technology.

The component developed by the researchers is a diode, an electronic device that rectifies a high-frequency (megahertz) alternating current (AC) into a direct current (DC) voltage signal. This conversion is needed for connecting with 'slow' components such as sensors or displays.

This new diode is a multi-layered structure, with each layer being stretchable and crack-free for straining (stretching) up to 50% ― slightly greater stretchability than that of a human's skin. The layers (current collector, anode, cathode and semiconductor layers) all involve different polymers, carefully chosen to have the required performance within a broad strain regime.

The scientists checked the mechanical durability of the diode by repeatedly straining and relaxing it; after 1,000 cycles the device performance had gone down but was still sufficient to operate at 13.56 MHz (the center frequency of an internationally approved band for radio-frequency identification applications).

Matsuhisa and colleagues demonstrated the utility of the stretchable diode by means of a wireless, wearable sensor combined with an electrochromic (color changes depending on voltage) one-pixel display system. The system, containing the diode, was stuck on the skin. Wirelessly delivered AC power (a radio signal) was converted by the stretchable diode into a DC voltage, turning on the pixel of the display. The wearable was subjected to various strains, which were 'measured' by the sensor, essentially being a strain-dependent resistor. Since the resistance of the sensor changes with varying strain, the voltage applied to the one-pixel display is strain-dependent, which the researchers could visualize through changes in the pixel's color.

The successful fabrication of polymer-based flexible high-frequency diodes is an important step towards wearable electronics with advanced functionalities. Matsuhisa and the research team anticipate that their intrinsically stretchable diodes "will help to enable future wireless and high-speed, skin-like personal healthcare systems for preventive medicine and telemedicine." 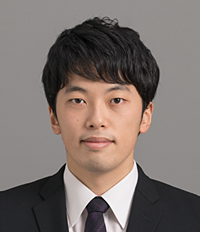 Faculty of Science and Technology, Department of Electronics and Electrical Engineering

Naoji Matsuhisa is an Assistant Professor at the Department of Electronics and Electrical Engineering, Faculty of Science and Technology, Keio University. He received his PhD from the University of Tokyo in 2017. His research interests are in stretchable electronic materials for next-generation wearable devices or artificial robotic skins.

https://www.keio.ac.jp/en/press-releases/2022/Jan/17/49-92115/
Subscribe to our free monthly newsletter to keep up with the latest research and scientific developments at Keio University.
Subscribe