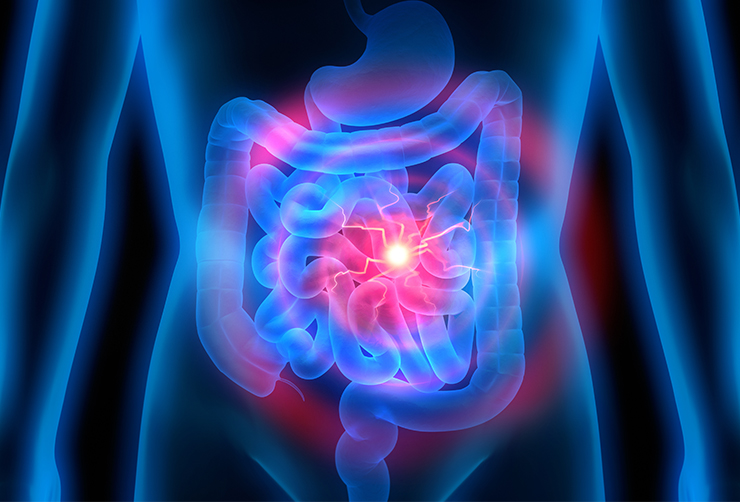 Bacterial cells are enveloped by a protective coating made up of complex sugar molecules. Mammalian cells that are under bacterial attack have evolved over time to recognize these complex structures and trigger a combative response. In turn, bacteria have developed a clever mechanism to evade this response, where the sugars in their protective lining are linked closely to small molecules known as amino acids. Bacteria have learned to disguise these amino acids by changing their configuration slightly. Instead of using amino acids traditionally found in nature (L-amino acids), bacteria adopt mirror-image variants called D-amino acids (D-aa) into their envelopes. However, a team of molecular biologists led by Jumpei Sasabe at Keio University has recently shown that mammalian cells may also have a way to degrade D-aa in order to keep bacterial growth in check.

Mammalian systems are equipped with an enzyme called D-aa oxidase (DAO) that is responsible for detecting and degrading D-aa. To see how exactly DAO works, the team employed mice that had been genetically modified to disable DAO. Notably, these mice exhibited high levels of D-aa in their blood.

When the body detects bacteria, a defensive mechanism is initiated via several steps. White blood cells, named granulocytes and macrophages, take the bacteria into their cells (eat them, so to speak) and sterilize them. Since these innate immune systems work regardless of the type of bacteria, they are the frontline defence system. However, even this is not enough, the acquired immune system comes into play next. The main players are lymphocytes, a type of white blood cells that flow in the blood. B-lymphocytes produce antibodies (immunoglobulins) that fight bacteria and render them harmless. This is how we become "immunized" to germs. DAO regulates the latter process. The researchers used a series of experiments to investigate how the immune systems of mice with disabled DAO behaved when they detected D aa released from bacteria in the gut. These mice showed exceedingly higher immunoglobulin A (IgA) levels compared to those with well functioning DAO. They also had a greater number of transformative B-lymphocytes ready to produce IgA. Healthy DAO function was thus crucial in keeping D-aa-producing bacteria in check and controlling the subsequent immune response. Moreover, mice with impaired DAO function also showed signs of increased inflammation in the gut.

A certain number of bacteria reside permanently within the mammalian gut and aid with digestive function in exchange for a home. Maintaining this symbiotic relationship is important in preventing infections and keeping our gut health intact. This study shows that DAO is a key element in degrading D-aa thereby preventing excessive immune responses against symbiotic bacteria. "Our results reveal unexpected roles of D-aa catabolism by host DAO in the adaptive immune system of the small intestine and provide a new perspective on host-microbe symbiosis," conclude the researchers. A deeper understanding of this protective mechanism in mammalian species can also be useful in devising antibacterial strategies targeting D-aa.

https://www.keio.ac.jp/ja/press-releases/files/2021/3/4/210304-1.pdf
(Japanese language only)
Subscribe to our free monthly newsletter to keep up with the latest research and scientific developments at Keio University.
Subscribe