Swimming hydrogel microbots get a measure of autonomy 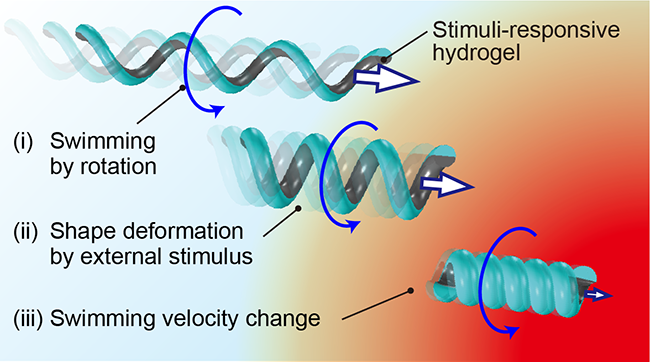 Concept of an autonomous microswimmer that responds to the surrounding environment © Hiroaki Onoe, Keio University

"One of the most important characteristics of evolution has been motility," explain Koki Yoshida and Hiroaki Onoe as they describe the driving force behind some of their latest research. Device engineers have long been keen to mimic the strategies microorganisms have developed for motion so that they can exploit them in microscale robots designed for drug delivery, microfluidics, and the transport of other microscale objects. Yoshida and Onoe ― both researchers at the Department of Mechanical Engineering at Keio University in Japan ― have now demonstrated hydrogel microscale robots that swim with unprecedented autonomy. Through geometrical changes in the coil of a custom-designed tail, these microswimmers can respond to their immediate environment by altering their speed and direction of travel.

Over the course of evolution, many microorganisms have developed a soft spiral-shaped "flagellum," a tail that helps them move around in fluid environments. These spiral flagella can respond to changes in temperature, nutrient concentrations, or pH, changing their direction of travel within tenths of a second. However, the artificial microswimmers developed so far have been primarily controlled by external rotating magnetic fields, which makes more localized control difficult.

Yoshida and Onoe overcame this difficulty by producing microswimmers from magnetic nanoparticles with flagella made from two hydrogels that spiral together back to back. When a rotating external magnetic field is applied, the microswimmer rotates and the spiral shape of the tail causes it to move through the water. However, if one hydrogel is responsive to the environment while the other is not, changes in temperature or pH, for example, alters the wavelength of the spiral and the pitch, that is, the angle at which it coils. In the absence of any changes in the rotating external field, these changes in the spiral parameters result in changes of speed and direction. 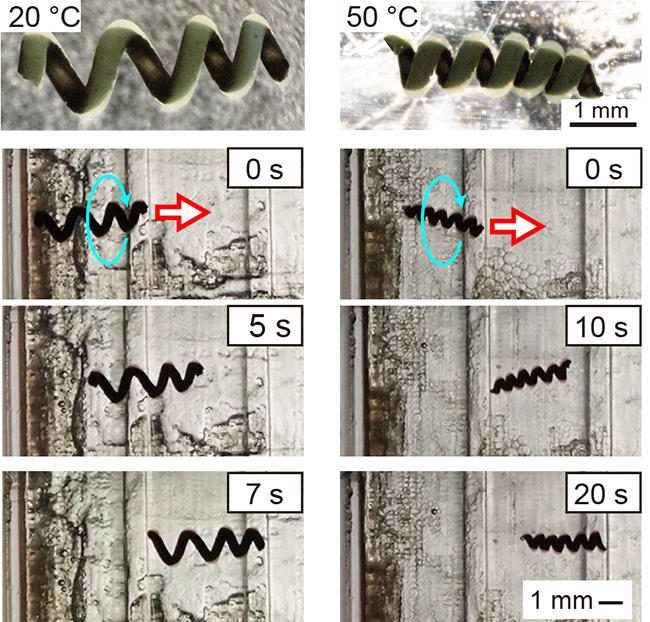 The researchers first demonstrated the effect with simulations before fabricating microswimmers from magnetic nanoparticles encapsulated in a stimuli-responsive gel layer and ﬂuorescent microbeads encapsulated in a propylene glycol alginate non-responsive layer. The resulting microswimmer has a spiral tail with the responsive hydrogel layer on one side of the spiral and a non-responsive hydrogel on the other. Sure enough, the geometry ― and consequently the velocity of the microswimmer ― changed gradually with changes in temperature.

In their paper, Yoshida and Onoe also point out ways of improving on the microswimmers with smaller bevels to fabricate them in smaller dimensions and with structural modifications to enhance their performance. They conclude in their report that "the proposed soft spiral-shaped microswimmer can open new avenues for various microscale biochemical applications, such as autonomous soft-robots and soft micro-probes for intricate, miniscule environment." 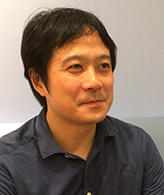