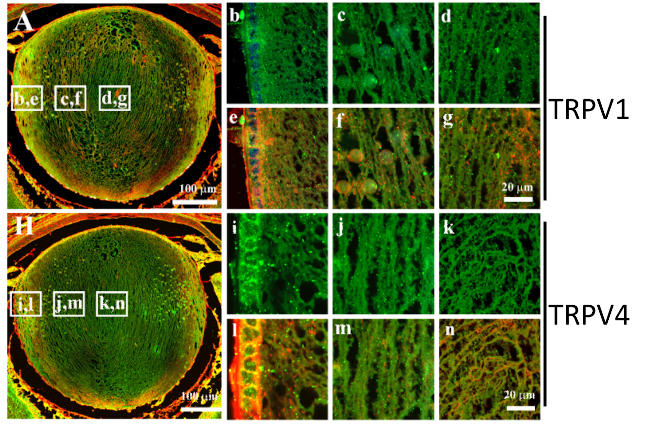 TRPV1 and TRPV4 in the adult mouse lens © Keio University


From mathematics to pharmacy to pharma-ophthalmic research

Yosuke Nakazawa of Keio University's Faculty of Pharmacy is focusing his expertise as a pharmacist on finding long-term treatments for cataracts-the clouding of vision that deteriorates with aging. "The main goal of my research is to develop pharmaceutical approaches for preventing and treating cataracts," says Nakazawa. "It's notable that worldwide, almost everyone over the age of 80 has cataracts. It's a major medical problem. I decided to pursue this research because I wanted to investigate new non-surgical methods for treating cataracts as well as solving the mystery of why the eye's crystalline lens can remain transparent in the first place. A cataract lens is like a boiled egg and exceedingly difficult to restore, in that boiled eggs do not return to raw eggs. So, my recent research is focused on developing ways to delay the onset of cataracts."

Eyes on hesperidin: compounds from citrus fruits to prevent cataracts

Treatment of severe cases of cataracts necessitates surgery to replace the eye's clouded lens with an artificial, intraocular lens. Notably, Nakazawa is searching for pharmaceutical approaches to reduce and ultimately prevent cataracts.

In a recent paper, Nakazawa and his colleagues reported that alpha-glucosyl-hesperidin--a derivative of the natural plant chemical hesperetin, which is found in many citrus fruits and vegetables--prevents the formation of cataracts.1

"The first step in the experiments for this research was developing a system to control the formation of cataracts in rats," explains Nakazawa. "We found that selenite administered to infant rats induced cataracts after a few days and we used this system to screen for compounds with anti-cataract effects."

Early results showed that hesperitin, which is contained in mandarin orange peel, had suppressed cataract formation without any adverse effects on other organs, so Nakazawa and his colleagues decided to continue focusing on hesperitin.

Next, Nakazawa asked Keio University's Dr. Takeshi Sugai of the Faculty of Pharmaceutical Sciences, and Martin Pauze, a visiting research student from France, to collaborate with him on synthesizing chemicals as potential compounds with stronger cataract-prevention effects.

"The drawback of this approach was that we had to administer the test compounds to rats by injection," says Nakazawa. "In practice, it would be impossible to administer compounds by injection in the name of cataract prevention research." So we changed our strategy and teamed up with an industrial partner, Hayashibara Co., Ltd., on using the water soluble compound α-glucosyl hesperidin (G-Hsd). The results were very encouraging. We found that oral administration of G-Hsd to a selenite-induced cataract model animal significantly suppressed the progression of cataracts."

In the next stage of this research, Nakazawa and his team plan to elucidate the molecular mechanisms governing the onset of cataract suppression using cultured cells and a variety of different cataract model animals, with the ultimate goal of creating a health supplement containing G-Hsd.

"In addition to preventing cataracts, I am also working on presbyopia--where the eyes begin to lose their ability to focus on nearby objects," says Nakazawa. "Again, presbyopia is a disease of the lens and is prevalent in people over the age of 50."

Patients with presbyopia must wear glasses when performing tasks that require them to focus on objects up close, thereby greatly reducing an individual's quality of life.

Nakazawa adds that although presbyopia is known to be caused by the hardening of the lens and its mechanism has been clarified, it is widely regarded as merely an age-related change in the lens. However, Nakazawa believes that lens-hardening occurs due to "water flow-failure"' and is focusing on the hydrostatic control mechanism of the lens.2 "We speculate that both the TRPV1 and TRPV4 proteins, two of which are expressed in the lens, may be involved," says Nakazawa.

Furthermore, in an unusual study, Nakazawa and his colleagues found that roasting coffee beans reduces cataracts in rats.3 "In our group we have been studying the effects of coffee on the living body from various angles," says Nakazawa. His findings on the anti-obesity effect of coffee were featured in a previous Research Highlights article in 2017.4,5

Crystalline eye-lenses are often referred to as "living diamonds" because of their shape and transparency, and that these diamonds lose their shine and become "dull cataracts." Nakazawa says that his research findings would not have been possible without the support of his many collaborators, mentors, and research students. "The time spent with them and the memories of working together are more valuable than diamonds," he says. 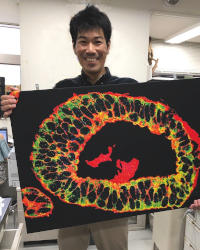 Yosuke Nakazawa received his PhD in 2012 from Keio University, and then continued working at the university as an assistant professor for six years. In 2016, he spent a year as a visiting researcher at the University of Auckland (New Zealand). He has been awarded the Research Academic Award from the Japanese Society for Cataract Research, and in 2020, he was selected as a project leader of a bilateral joint research project between Japan and New Zealand, "Roles for the mechanosensitive channels (TRPV1 and TRPV4) in the initiation of presbyopia and development of cataract."