Our daily decisions can be influenced by a variety of factors. This problem is important not only in psychology and economics, but also in philosophy. The nature of free will has long been a topic of critical discussion in philosophy, and previous empirical studies suggest that pure free will cannot exist in the human mind because every human decision can be affected by a variety of psychological and behavioral events. For example, our decision regarding an object presented as part of a temporal sequence is affected by previous decisions. This phenomenon is known as "the sequential effect," and it is repeatedly observed not only in our perception, such as in our estimation of the volume, brightness, and size of objects, but also in much more complicated subjective decisions such as the evaluation of monetary price, performance in sports, and of judging the attractiveness of faces. These findings were observed in experimental (laboratory) studies, whereas recent studies appear to show the sequential effect to be a set of "sequential error" as has been observed in surveys typically utilizing questionnaires. Throughout this project, we have been focusing on the psychological factors which impact many kinds of human decisions, especially sequential errors, using laboratory experiments and survey studies regarding happiness, personality, mind-wandering, sense of agency, facial expressions, and art appreciation. In the report below, we focus on explaining two studies: the web survey on happiness and art appreciation in a laboratory setting.

In our study, we tried to focus on the evaluation of happiness, for which previous studies have shown a low score for Japanese people. In contrast to the international average of 63% of respondents to the survey by the Organization for Economic Co-operation and Development (OECD 2010) reporting that they were happy, approximately only 40% of Japanese respondents did so. Thus, Japanese people are ranked as being less happy than their relatively high level of GDP might predict. However, most surveys in Japan revealed that response distributions for subjective well-being items indicated excessive blips in middle-ranged scores. We examined why Japanese people tend to respond with middling answers to items in web surveys, in which participants responded not only to a series of the happiness scale, but also responded to four items that were embedded into the scale and designed to detect careless or unmotivated respondents with instructions to choose a certain response option. Of the study's respondents, about 40% failed to follow instructions for at least one of the four items. They often chose middling answers to question in well-being categories. When those who did not follow instructions were excluded from the complete sample, middle-ranged scores showed low or no anomalies, and the proportion of respondents with high rating scores increased. Thus, our study suggests that one reason for the reportedly low proportion of happy people in Japan was that many respondents are not diligent in following instructions. This claim is a serious problem for survey research in general: there may be many types of related factors influencing the data gleaned from participants' responses.

Furthermore, we also examined variability of participants' responses in laboratory experiments. For example, we examined the progressive effect of repeated exposure to artworks against the participants' viewing times and their evaluation of individual works of art, as might occur when an individual walks through a gallery or in empirical laboratory studies on art viewing. A much-discussed topic in art discourse is the impact on a viewer of displaying a large number of artworks, most commonly in conjunction with the assumption that this may be tied to reduced interest, engagement, or even enjoyment. Our appreciation of art is high when we first see artworks and are focused, but our appreciation gradually reduces as we spend more and more time in a gallery environment. This is often called as "museum fatigue." Previous studies have only looked at viewing durations as a proxy of interest without considering the actual impact on ratings. More importantly, previous studies have not related museum findings to the laboratory and typical paradigms of exposure to multiple artworks.

We found three previous studies that examine the impact of repeated exposure to artworks on viewers' engagement and evaluation ratings towards artworks in laboratory settings, and to assess the robustness and universality of this effect. In our study, we first conducted a replication of one of the few extant lab-based studies, considering art viewing times and beauty rating scores towards artworks over multiple exposures to paintings. Moreover, we introduced a new procedure which accounted for a methodological limitation of past studies, removing the ability to shorten the overall study by shortening exposure to the artworks. Furthermore, we conducted one more replication study that also considered the potential modulating impact of within-study break-times. We also tested both Japanese and Western participants to examine the robustness and universality of this effect, as this was a joint study with a team at Vienna University. All studies showed that viewing times and beauty rating scores decreased over subsequent exposures, regardless of the cultural background of the art viewer, potentially reflecting a universal factor in art appreciation. We also found that the act of art viewing itself may be taxing, with participants often choosing a blank screen over prolonged viewing of artworks. The repeated exposure effect was also minimally changed by taking breaks. 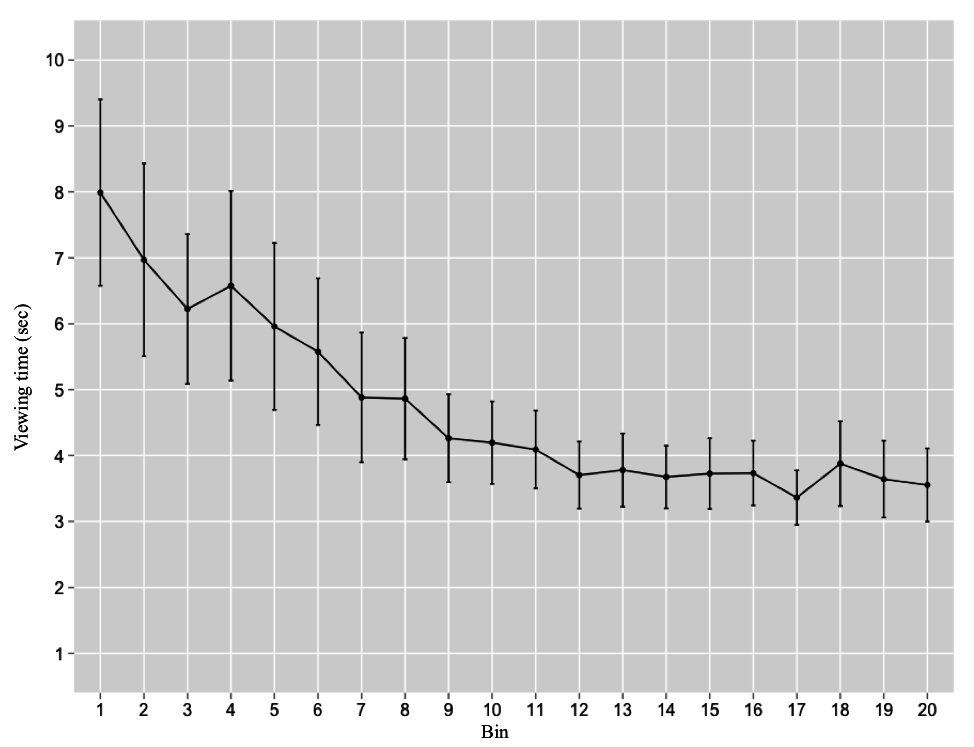 We would like to thank the Basic Research Grant Program for the Advancement of Next Generation Research Projects at Keio University for their support. We still have much data under analysis and have submitted several papers based on this data set. This is an excellent opportunity for our team not only to further our research but also have international joint studies, mainly with researchers at Vienna University.

Keio University Program for the Promotion of Next Generation Research Projects

The Keio University Program for the Promotion of Next Generation Research Projects subsidizes research costs with the aim of finding solutions to challenges and of promoting global academic research in order to allow Keio University faculty members to establish a presence as core researchers.