AI technology is increasingly being used in sports to analyze and improve the performance of athletes and teams. In particular, video analysis is proving to be an effective method for evaluating the performance of players and developing team tactics.

"In rugby, to analyze formation using ball and player position, it is necessary to detect play events such as scrums and lineouts," explains Yoshimitsu Aoki, a professor at the Faculty of Science and Technology at Keio University. "Until now, these tasks have been carried out by specialist analysts. The aim of my research is to automate these tasks using 'AI image technology.' Specifically, the ball and players are automatically detected from the video, and passages of play such as passes, kicks, and scrums are recognized based on such information."

As shown in the video, the ball and players are accurately detected and tracked, while their positions are mapped on the field. Using this method, passages of play can be automatically estimated and tagged so that a user can easily search for the desired sequence.

"Using this system, statistical information from sports matches can be obtained rapidly. We are planning to apply this technology to other sports and action recognition issues." 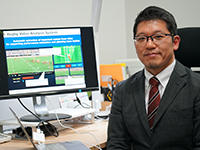 Department of Electronics and Electrical Engineering, Faculty of Science and Technology

Yoshimitsu Aoki received a B.E., M.E., and Doctorate in Applied Physics from Waseda University in 1996, 1998, 2001 respectively. He is currently a Professor at the Department of Electrical Engineering, Keio University. His research interests are in image processing, computer vision, pattern recognition, and artificial intelligence systems.