The chemical structure of drugs affects their toxicity 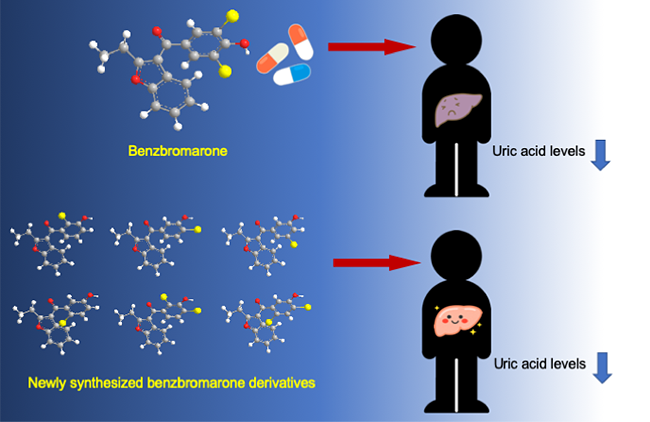 Benzbromarone (BBR) is a drug used for the treatment of gout. It works by promoting the excretion of uric acid, the culprit behind the condition, within the kidneys. However, because BBR therapy causes liver toxicity, it has not been approved in the United States and has been withdrawn from European markets. BBR undergoes chemical changes in the liver, leading to modified forms of the drug known as metabolites. These metabolites are toxic and damage the energy―producing components of the liver cells, the mitochondria. A research team led by Tadahiko Mashino and Tomoyuki Ohe at Keio University has now developed derivatives of BBR that do not produce these toxic metabolites, potentially offering safer treatment options.

The team first conducted a thorough investigation of the various metabolic pathways of BBR and realized that one metabolite, 2,6-dibromohydroquinone (DBH), was primarily responsible for the toxic effects. The position of a chemical group known as the hydroxyl group on the BBR molecule was integral for its conversion into DBH within the liver. Modifying the position of this hydroxyl group may therefore prevent the synthesis of DBH. To test this hypothesis, the researchers created six such structural analogues and compared them all to BBR.

Liver cells extracted from mice were first exposed to the BBR analogues. The secretion of lactate dehydrogenase, a protein which is released when cells are damaged and rupture, was used as a measure of toxicity. As expected, all the analogues induced significantly less lactate dehydrogenase secretion compared to BBR. The effects of these BBR derivatives on mitochondria were then assessed. Drugs inducing toxicity often cause the mitochondria to become highly porous. However, the mitochondria of mice liver cells remained intact when exposed to the BBR derivatives. Structural modifications to BBR thus successfully reduced liver toxicity. After establishing the safety of these analogues, their effectiveness in treating gout was ascertained. For this purpose, human kidney cells were treated with the six analogues, all of which proved to be almost as effective as BBR in preventing the uptake of uric acid within these cells.

"In summary, we synthesized a novel set of BBR derivatives that were designed to avoid metabolic activation via ipso-substitution and found that they exhibited lower cytotoxicity in mouse hepatocytes," conclude the researchers. These BBR derivatives have the potential to be developed further as alternative treatment options for gout. After receiving his PhD in 1997 from the University of Tokyo, Tomoyuki Ohe worked as a drug discovery scientist at Merck Research Laboratories in Japan and the US. In 2011, he started working at Keio University as an associate professor. His research interests include medicinal chemistry and drug metabolism.